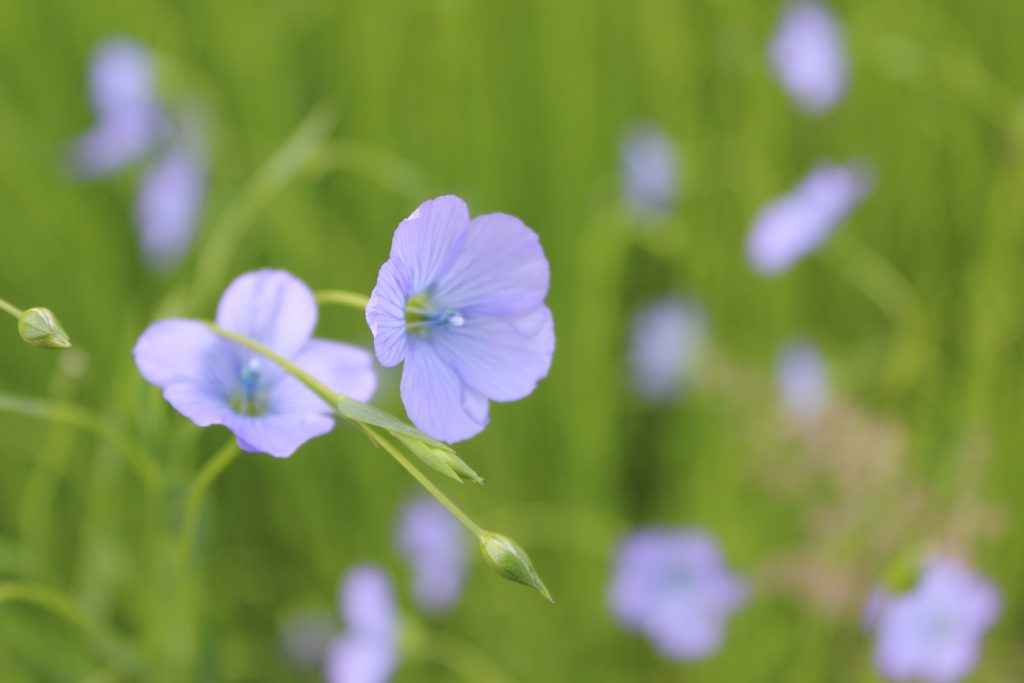 Following in the Footsteps of our Ancestors

Why such and interest in Flax? My interest in flax was roused for a number of reasons, firstly it was grown by my own family in Longford in 1796 and also by my husbands family, a fact that is recorded in the 1821 census. This census also tells us that there were four female members of the family working as spinners, a mother and her three daughters, the youngest not yet a teenager. This alone shows us the  important role that women played in providing for their families and how they trained their daughters from a very young age to become skilled workers who could contribute to the family income. Spinning would only have been a part of the work of a farmers wife but one that was very important, so important that a woman was listed on the census as having a skill, she was not a farmers wife, housewife or mother, she in her own right had a skill that was recognised, that enabled her to earn money and was worthy of being recorded.

Another reason is my love of craft, I could spin wool but the techniques involved in spinning flax are somewhat different, it provided me with another challenge.  When I think about all the reasons ultimately we just wanted to experience the growing, processing and spinning of a fibre that was an essential part of the economy of Co Cavan, one with a strong family connection. A piece of history that we wanted to recreate by doing everything from the planting to the spinning and only then could we fully understand the amount of labour involved in turning a plant fibre into linen thread. 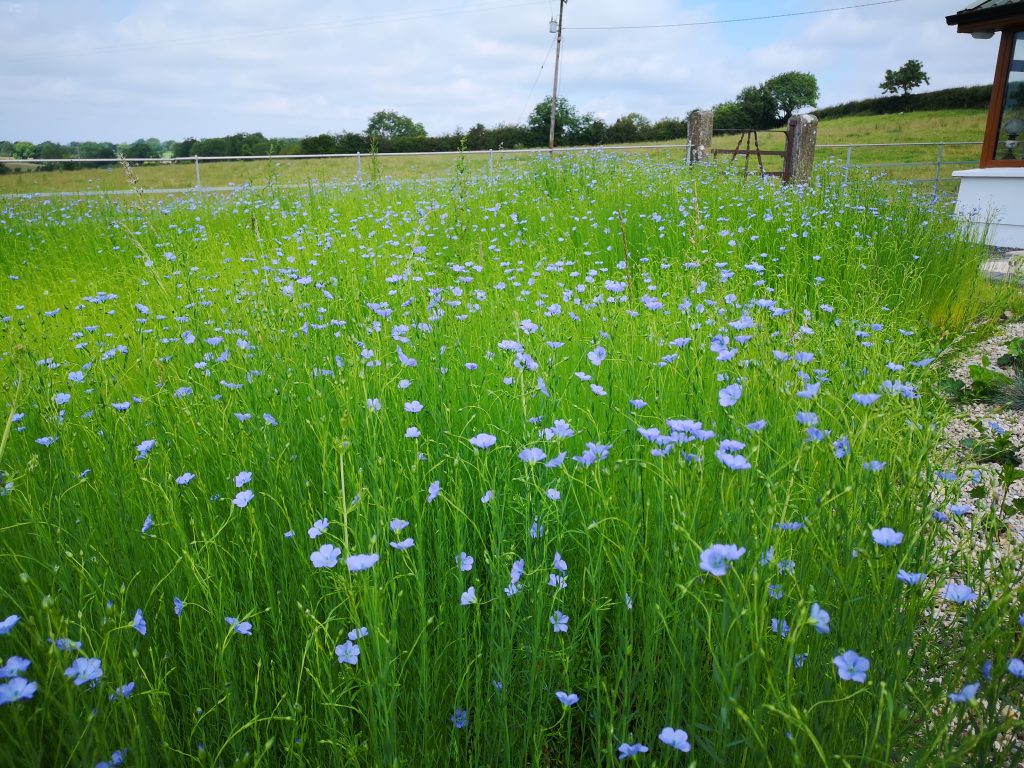 We grew a small crop of flax for the first time in 2019 and learned so much along the way. We built and bought the equipment that we needed to process the fibre and this year we managed to spin linen tread from our own plant fibre. A wonderful experience that could only give us a greater appreciation for the backbreaking work that our ancestors did. Lets now look at the history of the flax industry in Co Cavan.

In the 18th century one of the biggest industries in Ulster was the linen industry. Linen fabric is made from a plant called “flax” and this plant with its beautiful blue flowers was a familiar sight in the fields of Cavan. The use of flax to make linen goes back 5000 years and although linen had been produced in Ireland for many years it was not until the late 17th century that it began to be produced in a larger scale.

Across Cavan towns held fairs and markets on different days of the year, these fairs and markets became important occasions for the trading of linen tread and fabric. By the end of the 18th century Cootehill had emerged as the most important market in the country. Buyers travelled to Cootehill from Belfast, Dublin and even London, as a result the town attracted the most skilled weavers and spinners.
In Co Cavan at this time most farmers were tenants with small plots of land. Growing flax, spinning and weaving it were more profitable than other forms of farming. If we look at the flax growers list of 1796 and the national census of 1821, we can see a clear picture of the involvement of the rural communities in the linen industry. If we take a typical family living on a tenant farm the men were listed as farmers or labourers while the women were spinners, this included farmers daughters, some as young as 11 years of age. This changed considerably in the 1830s, the spinning and weaving of linen moved to the now highly industrialised area around Lisburn and Belfast, an area where many large mills were built along the Lagan gaining it the name “Linenopolis”. When the work of spinning was lost to rural Cavan many of the skills died with it, the spinning wheels sat quietly in the corner till eventually the fell asunder.

Producing linen fabric from the flax plant is a very labour-intensive process, it begins with the planting of the flax seed in the spring. When the weather conditions were favourable the ground was tilled and the seed is sown, two months later the beautiful blue flowers appear and by approximately 120 days from sowing the crop was ready to pull. The flax must be pulled from the ground to maximise the length of the fibre and as each bundle is pulled it is tied into what was known as a beet. If the farmer wished to harvest the flax seed they would allow the flax to dry then pull the heads through a hackle thus removing the seed, this is called rippling. The next part of the process was the retting or as it was known in Cavan “drowning the flax”. The bundles of flax fibre were immersed in a water filled hole and weighted with sods and stones, they stayed here for 10 to 14 days in which time a bacterial process has dissolved the pectin freeing the flax fibre from the inner core. When the flax was retted the bundles were taken from the flax hole, opened out and spread on the ground to dry then retying the flax into bundles. At this stage the extraction of the flax fibre began, firstly the flax was passed through a flax breaker, this cracked the hard inner core and prepared the fibre for scutching. The scutching was done in small local mills, men stood in cubicles working in pairs and as wooden beaters rotated the fibre emerged. The scutched fibre was take home from the mill and the final preparation before spinning began, the combing. When fully combed the flax fibre resembled human hair, it was soft shiny and a deep blonde colour. To spin flax fibre the distaff on the spinning wheel must first be dressed, this was done by the lady spinning and she tied the fibre in place with a ribbon before the spinning began. Spinning of flax differs greatly from wool spinning, the flax fibre must be kept wet to spin it successfully, this releases the pectin and produces a strong smooth yarn. When spun the fibre is finally woven into linen fabric. Irish linen had the reputation of being the best linen in the world and the people of Cavan were part of that very important process. 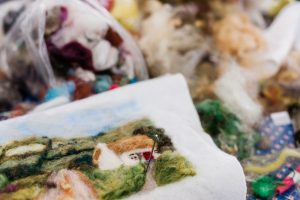 Anyone can make a Needle Felted Picture

The joy of needle felting, colour, creativity, and just pushing that needle into the sponge, its therapy too…. 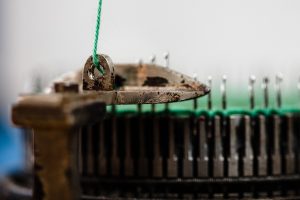 Our Journey into the amazing world of Sock Knitting Machines

In 2016 we established Crafts of Ireland to allow us to share the many skills that we have learned, and to do our part in preserving our rich craft heritage.